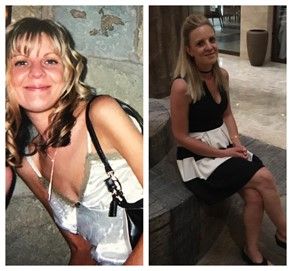 My name is Katie and I have an eating disorder. Not words I ever imagined I would say…

Around 20 years ago I was at my peak of illness. Five and half stone and being admitted into hospital were dark days, but I’m lucky enough to be here now to tell the tale.

I still don’t know what or how it happened. I was in my late teens/early 20’s and just becoming increasingly aware of my appearance I guess.

It simply started as just gradually reducing what I ate. Suddenly it starts to feel amazing to have this control. The compliments I got from the weight loss were also encouraging to keep this up.

Down to living off just one cup a soup a day and, living with my mum, it soon become noticeable as the weight was dropping off. However, I could not give this up now, I was in too deep and I wasn’t letting this go…

Finding ways around it, I eventually started to make myself sick after meals. Ahhhh this was so much easier, I thought, so much sneakier. I always said, looking back, I could have been an excellent hustler.

To everyone else I looked like I was eating normally again, however in secret I was sneaking off to the toilet after meals. Until the day came I was followed and caught… the devastation I felt and my mum.

I was whisked off to the GP and referred for counselling however, still refusing to give this up, I used these sessions to get out of work to continue to be sick.

Still trying to hide this as I did not want it to be discovered again I thought of other ways to get rid of food after meals. From being sick in the shower to being sick in bags and hiding them until my mum had gone out then I could throw them in the bin. I would find a way!

I could not stand the thought of standing next to someone overweight in case I caught being fat. I could never eat out, restricting the number of calories per day.

I could not share plates, cutlery etc for the fear of these being contaminated with fat….. just a few of the everyday thoughts - you can imagine were draining.

There is so much more I could go into around the torment of this illness and how it controls you every day. This is not a fad this is real!

The best way I can describe it is to think of something you are so terrified of and think of facing this fear at least three times a day. This is how those with eating disorders feel at every meal time and with something that should be so natural as eating.

The time had come I needed to sort myself out, I was losing teeth and my hair.

Being 5ft 6in at my lowest weight of five and a half stone and my organs starting to fail - I needed help and fast. I was admitted to hospital.

This experience was something I never want to go through again. There were many interventions which helped to change my mind set and helped me to understand why I was having these thoughts and feelings.

I have to say the thing that helped me through was the support of my family and friends….. they NEVER gave up on me, they NEVER let me down. I think it’s safe to say without them I may not be telling this story now.

Can I give a quick answer how I got better… unfortunately not.

Can I give an overnight cure… still unfortunately not.

But what I can give is hope… hope to anyone that is reading this for themselves, or a loved one, that it does get better and I am proof that recovery is possible.

It’s something that will stay with me throughout my life, but something that I can now control. I look at it as a scar - a scar I look at and say, even though you are there, for today and going forward I’ve beaten you!”