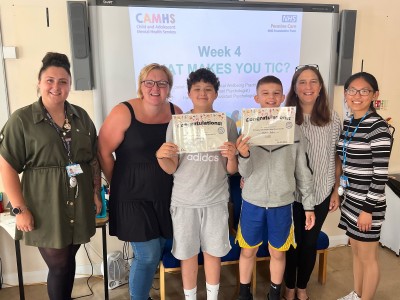 A first-of-its-kind support group for young people with Tourette’s has been set up in Tameside.

Pennine Care NHS Foundation Trust’s Tameside and Glossop child and adolescent mental health service (CAMHS) set up ‘What makes you tic’ to deliver psychoeducation and coping strategies to young people with their families.

Young people and their parents have been joining each other to share their stories, swap strategies and discuss their experiences. It’s a rare and valuable opportunity to have a safe space where people can be themselves and open up without judgment.

Louise Cowen, children and young people’s psychological wellbeing practitioner, was one of the staff members who formed the group:

"We’d seen an increase in referrals for tic presentations across Tameside and Glossop and realised there was no direct service for intervention, so we developed a programme for tics and Tourette’s. We’ve also adjusted the tic pathway so that most people with presentations are more easily accepted for this group intervention, rather than having to wait for things to get more severe.

“We decided a group would provide a safe and confidential space, improve access, reach more families and to allow them to see that they are not alone. Keeping it to less than ten individuals per group proved to reduce anxieties and promote a confidence for both parent and child to speak.

“Involving parents was an important step to help them support their young people at home and within other environments such as school/the outside world. Interestingly some of the parents also experience tics and have never received support, so the group has also been directly beneficial for parents too.”

Julie Johnson attended the group with her son Ben and echoed a similar learning experience for the two of them:

“Ben has really enjoyed being with other young people with similar experiences he can relate to, it’s a welcome safe space where he didn’t have to suppress his tics and can talk freely. Hearing how his peers understand their condition helped him understand his own, it’s much more powerful hearing it from someone the same age instead of an adult.

“He was nervous initially; lockdown had meant online groups which proved problematic as talking about Tourette’s and tics makes his presentation more pronounced and felt he was adapting other children’s tics as he watched them. He was worried it would be the same in person, but he really enjoyed it once he had been to the group and ground rules were established.

“As a parent it was valuable in terms of getting to attend too, supporting Ben can feel isolating and you doubt what you’re doing is right as there is limited research available. But meeting others and hearing how they support their children was a big help and alleviated those concerns.

“Whilst it’s felt like a short intervention and it would be great if it could be expanded across the country, it’s helped us increase our confidence and adapt our own strategies like using chewing gum to help tics. You can feel really isolated and helpless when your child is in pain, anything to reduce that is a win as a parent.”