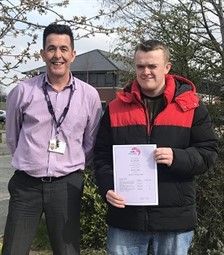 Thanks to dedicated support from one of our learning disability nurses Mike Hamilton, a Bury football fan with mild learning difficulties has achieved his dreams.

John McDonald, 22, from Radcliffe, was referred by his GP to our Bury community learning disability service.

Mike worked closely with John to understand the issues he was facing and how they affected his health and wellbeing.

As Mike got to know John, he recognised that he had strong ambitions, but lacked the skills and confidence to make his dreams a reality.

Mike went over and above the standard health and wellbeing support offered by the team to help John develop a plan of action.

John has now successfully completed several college qualifications including an NVQ level 2 in spectator safety and a level 2 certificate in customer service.

John was excited when a job was advertised with Controlled Solutions Group (CSG), which provides match day stewarding for Manchester United Football Club. However, he was reluctant to apply due to having no job interview experience and a lack of confidence in his ability to do the job.

Mike offered John the encouragement and practical support he needed to submit his application – including mock interviews to build his experience and skills and advice around what to wear and how to make a good impression.

John successfully completed the rigorous multi-stage interview process and a five week training programme. This required huge commitment, including travelling from Bury to Old Trafford by public transport several days a week and in-depth testing of his knowledge of crowd control, basic first aid and much more.

To support John’s goal of living independently, Mike arranged for him to move into a local supported housing scheme. This aims to equip adults who have a learning, sensory or physical disability with the skills and knowledge they need to successfully live independently – for example budgeting and paying bills.

Thanks to the support provide, John has recently moved into his own rented accommodation.

John said: “Before I met Mike I was really struggling. There were things I wanted to achieve, but I didn’t know which way to turn.

“I found it difficult that I couldn’t get a job in football and move into my own house straight away. But Mike helped me to see that I needed to go through a process. One of the biggest things he helped me with was getting out and about and linking with the right people.

“I feel proud to have my own house - it’s tough paying the bills but I enjoy it. I’ve been a Manchester United fan since I was little, so my steward job is a dream come true.

“I really enjoy keeping the crowds safe, getting close to the players and seeing them score. Sometimes there is tension between fans, but this motivates me and gives me job satisfaction.

“I’ve already done my level one football coach training and my next goal is to become a football coach. I also want to move to Prestwich, which has lots going on and better transport to Manchester.”

Mike added: “I was really struck by John’s clear ambitions for the future and wanted to help.

“I’m really proud of John and pleased I was able to support and encourage him to achieve his dreams. But his success is really down to his determination not to let anything hold him back.

“I was really impressed with CSG; despite the challenges that John faces, they didn’t discriminate. Instead they put adjustments in place to make sure he wasn’t at a disadvantage, such as adapting their training manual.

“While the support offered to John is not an official part of our service, my team and I really care about every service user. We’ll always do what we can to make sure they are healthy, happy and can achieve their goals.”

Here is a short video clip from John and Mike.