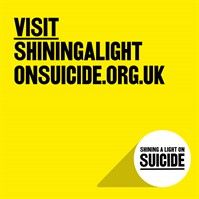 We are proud to have been involved in the development of a new Greater Manchester suicide prevention campaign, which launched on 1 May.

Shining a light on suicideShining a Light on Suicide aims to encourage people to start talking about suicide and to promote the support that’s available.

A new website has been launched for anyone affected by suicide, click the links below to find out more:

• Are you feeling suicidal?
• Are you concerned about someone?
• Are you bereaved by suicide?

Learn to save a life

This short training could help you to save a life by learning to talk about suicide. Click here to find out more.​

Suicide is the biggest killer of men under 49 and women aged between 20 and 34. More than 200 people a year take their own life in Greater Manchester.

For every suicide that occurs, there are up to 20 more suicide attempts and one in five of us have had suicidal thoughts.

Together we can help to prevent suicide.